Working in offshore wind its kind of obvious you go where the wind farms are. For the past year I’ve had the pleasure of spending a lot of time in Brighton as the Rampion project starts to take shape.  Its fascinating to see how the attitudes of the different communities around the country change, often very much reflected in their political standpoints. With Brighton, represented by the only Green Party MP, there is a huge amount of support, making life easier as a stakeholder manager in one way – more support for offshore wind energy – but also harder because of the overwhelming level of interest. But its not always interest in what you think there would be interest in. The technology? The environmental benefits? The timeframe for construction? The huge engineering effort? Yes, yes, yes and yes. But by far the most excitement has been around an elevated excavator that sunk off Worthing during works to backfill a trench needed for the export cable installation.

The Rampion team is working full speed to try and determine to best way to remove the sunken digger, but in the meantime the local community have adopted it and when it goes, I am sure it will be sadly missed. Its been christened ‘Moby Dig” and online surveys have been running as to whether it should be left in situ to become a permanent fixture (no is the answer) and whether it should run for MP with the hashtag #mobydigforMP. At last look more than 50% of respondents said it should! Its become a (kind of dangerous) plaything for kite surfers and been adored with a jolly roger.  It has had a poem written about it and received almost more local media coverage than the rest of the construction works to date!

Who would have thought that a sunken digger would become the star of the show? And its not over yet. A huge turnout is expected when the 80-tonne excavator is finally removed. I take the huge amount of good humoured interest in Moby Dig as a plus sign for the offshore wind industry. Once an unfortunate event like the sinking of a digger working on an offshore wind farm would have been met with a unanimous chorus of disapproval all around, but other than a few of the usual misinformed Daily Mail readers, this has shown that, when given the choice of how to interpret and view the sinking of “Moby Dig”, the vast majority of the local community has very much been on the generous and light-hearted side. And I choose to view that as a vote of confidence for offshore wind, that it has reached the stage where it is on the whole, accepted as an integral part of the UK’s energy family. 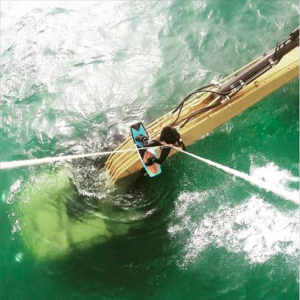 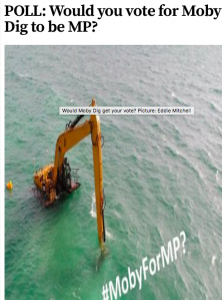 Image by a local kite surfer